Pam Faulkner, RN, BSN and Stephanie Wilt, RN, BSN both work with the Hannibal Regional Healthcare System in Hannibal, Missouri. They both partner on a Population Health project in their rural setting, and they have one more thing in common. They both are graduates of The Clinical Health Coach® training program.

In 2013, the Accountable Care Program at Hannibal Regional Healthcare System (HRHS), took a proactive approach by offering a service to their team members to help them better manage their health and to lower the cost of the organization’s health care plan and increase productivity. Pam Faulkner and Stephanie Wilt’s roles were to assist team members with managing chronic diseases and modifying unhealthy behaviors, while encouraging preventative screening. They used a team approach to complete biometric screenings on all of their hospital’s employees annually. Of 908 employees participating in biometrics, 236 were identified as candidates for their health/wellness coaching services. Of those 236 candidate employees, 56 employees opted in. Once on board, the employees were coached 6+ times over the course of the year.

In 2013, they also received a two-year grant (funded by the Missouri Foundation of Health) with a mission to improve the overall wellness of their Super utilizers of the Emergency Department. After going into the home (in the beginning every couple of weeks, then transitioning to once a month) both Pam and Stephanie placed high value on meeting with these individuals in their homes. They noticed and observed more influencing factors than if they had relied on telephonic coaching or meeting in the clinic setting.

Both Pam and Stephanie rely heavily on the coaching skills they learned through the Clinical Health Coach® training program. Stephanie’s biggest take-away was re-training herself to not “tell” the patient what to do. She put it into play while coaching and following a 50 year old male. He was a smoker, diabetic and recently had bypass surgery. After coaching her patient for only 1 ½ months and focusing on “Change Talk”, Stephanie saw her patient lead his own behaviors into a healthier more productive lifestyle. “Starting small is key”, Stephanie commented. Her patient today has given up smoking and drinks diet-soda, rather than the 10 regular sodas he drank daily.

According to Pam, the biggest gain she made after attending the CHC training was developing her “listening skills”. Now, she may ask a simple question such as, “So, what brought you back to the ER?”…then she just listens. It opens the door that Pam needs to begin to coach them into taking ownership of their own health. Pam said she meets the patients at the place they are at, and works to make the changes work for them. Even if it means being a little creative with her approach, Pam will find a way. One of her patients smoked a pack of cigarettes every day and spent a lot of time on Facebook.

Currently, she no longer smokes and rides her exercise bike while Facebooking!

The results of the one year study were encouraging. Improvements were seen in all values measured in biometric screenings for those team members who participated in the Accountable Care Program (see Table below). In addition, an estimated 80% decrease was seen in total Emergency Department charges for three of the highest utilizers enrolled in the population health program, as well as 46% decrease in ED and inpatient stays for the highest utilizers. 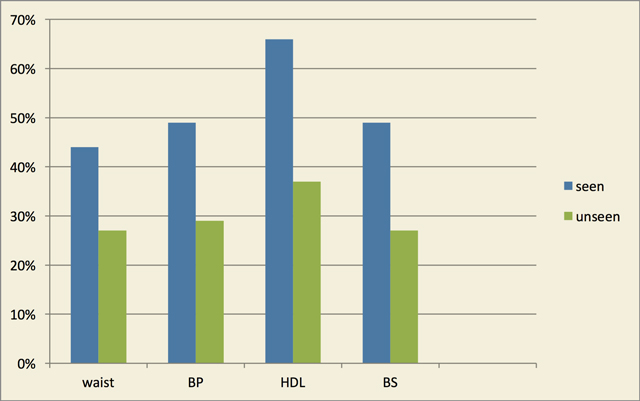 *The “seen” group represents 47 individuals that were eligible to participate in the Accountable Care Program because of baseline biometrics (high risk) and received health coaching and follow-up.

The “unseen” group represents 47 individuals that were eligible to participate in the Accountable Care Program because of baseline biometrics (high risk) but opted out of health coaching services.

For more information about either of these successful programs, please contact Pam Faulkner at [email protected] or 573-406-1628.